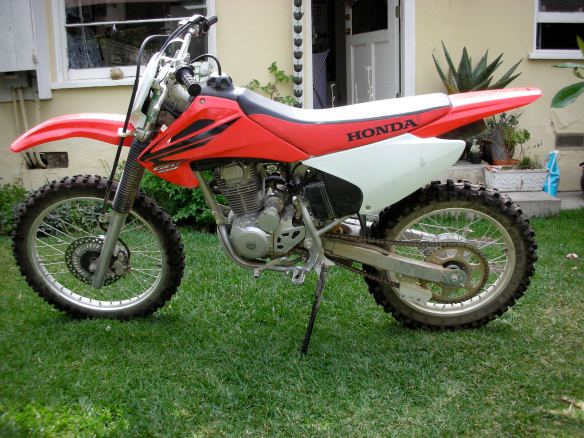 Free to ride machines…well, almost.  I leave in 10 days and the bike (Honda CRF230f), just might make it across the border with me.  As you can see from the pics, the bike has come a long way and testing should be better be must be done this week.

Why such a small ride…?

It happened every time I discussed with friends doing a big trip.  The subject of bikes would come up, we’d talk a lot about capable off-road bikes–XRs, KLRs…etc.–and inevitably we’d get to the little Honda sitting in our garage.  E.’s bike–a Honda 2007, CRF230f.  Avid riders themselves, my friends would initially laugh it off, go silent , and after a few minutes say something like: “That would be awesome to pull off a trip on that bike.”

And so it is.  The bike has a few miles on it, but it’s in good shape.  Still there are challenges and each day leading up to departure is a mix of exhilaration, panic, and fatigue that comes with trying to finish prepping the bike.

Several tests of the two-three-oh made me realize that 1.) I didn’t have the speed to get out of the way of a fast running dog; that 2.) the weight over the back of the bike made the front of the bike so squirrely that a yard sale was not far away; and that 3.) the seat was so hard, I might as well have been sitting on the airbox…totally, unacceptable.  Not to mention the fact that there is no aftermarket bolt-on fuel tank for the 230 (I guess Honda figured “who is going to run out of gas on a 230?”).

Two times I have torn down the bike to locate a bad circuit or blown fuse that rendered the bike utterly dead. Not “troubleshooting-a-bad-running” motorcycle kind of dead, but a painfully silent motorcycle dead that reminds you just how large the desert can be, and that a 35 cent part (fuse) can render a electric-start motorcycle immobile—and me impotent—until that time that the problem is identified. That’s a lot of freedom.

But, at the end of the day, the bike is simple, problems are only problems if you have them on the trail, and that most of the stuff that has me up at night can be dealt with as it comes–a little bit at a time.